Buy works by André Butzer in our upcoming auctions!

Do you own a work by André Butzer, which you would like to sell?

André Butzer - Works that have already been sold at Kunsthaus Lempertz:

André Butzer is a man of contrasts. The German painter changes his style like other people change their shoes, moves with the confidence of a sleepwalker and classes the colourful pop culture artist Walt Disney as a role model as much as the dark symbolist Edvard Munch.

André Butzer – Failure at the academy led to new paths

Born in 1973 in Stuttgart, André Butzer studied in his hometown for a short time at the Merz Academy before relocating to Hamburg. There he enrolled at the College of Fine Arts and after arousing the displeasure of his teacher Franz Erhard Walther with his colourful, comic-like figures, failed an important examination after only two semesters. Butzer’s membership in the Hamburg art group Akademie Isotrop from 1996 to 2000 proved to be more profitable. Looking back, the artist considered these years a very important time, giving him many valuable contacts and useful debates. He published the artist magazine Isotrops with his young avant-garde colleagues, and in 2001 founded the Institut für SDI-Traumforschung (Institute for SDI Dream Research) with the contemporary sculptor Björn Dahlem. In his early years, André Butzer held Paul Cézanne as an idol, whose work he studied in depth; Friedrich Hölderlin, Henri Matisse and Henry Ford also played important roles for the young artist.

Everything except mainstream: Art from Nasaheim

André Butzer has achieved a certain popularity with his, as he refers to them, Science-Fiction Expressionist works, which he self-confidently and unpretentiously traces back to the inspiration of the comic mogul and cartoon pioneer Walt Disney. They are powerfully colourful works that oscillate between figurative and abstract representation and exhibit neo-expressionist echoes. More recently, the artist has also introduced increasingly monochrome works in a geometric-abstract style, which appear to have been painted by a completely different person. The fictitious town Nasaheim is a utopian project of the heart which he locates as an idyll and place of pilgrimage in outer space, where the extermination machines of mankind are shut down and end up as museum exhibits. Despite this premise, André Butzer’s paintings do not possess any narrative structures. The artist does not want to tell, but feel; does not want to present, but mediate. These so-called N-Bilder, which have become a trademark for Butzer, do not contain, according to their creator, any theme or motif or reason; they are their own size, their own norm and their own standard.

A hope bearer of contemporary art

André Butzer reaches the double-figure range in galleries between Berlin and Tokyo, is a meteoric climber and a star of the international art scene, despite the unsuitability of his work for the mainstream. Although his career began with colourful, almost naïve-like pictures, the artist displays a great love for the colour grey, which he understands to be the multiple potentiation of all colours. Recently, André Butzer’s idiosyncratic art has been the subject of many exhibitions, sometimes under extremely curious guidelines, as in 2009 for example at the Nuremberg Kunsthalle with a whole decades-worth of work in the retrospective Viele Tote im Heimatland: Fanta, Sprite, H-Milch, Micky und Donald! Paintings 1999-2009.

André Butzer lives and works in Rangsdorf, Berlin where he has set up a studio of enormous dimensions on the disused site of a 1930s aircraft factory. 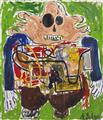 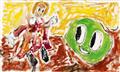 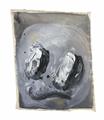