Buy works by Tony Cragg in our upcoming auctions!

Do you own a work by Tony Cragg, which you would like to sell?

Tony Cragg - Works that have already been sold at Kunsthaus Lempertz:

Tony Cragg cannot stop time, even when his sculptures sometimes evoke this impression. The English sculptor is a master at capturing a crackling dynamic with his pieces that give the viewer the illusion of organic movement. In doing so, the artist cultivates an idiosyncratic choice of materials which sets him apart from many of his colleagues.

Tony Cragg – Through the natural sciences to fine art

Tony Cragg was born Anthony Douglas Cragg in Liverpool on 9 April 1949. The son of an electronic engineer in the aviation industry, he was initially taken by science and technology and strove for a career as a natural scientist. He temporarily worked as an assistant in a biochemical laboratory but soon recognised that this did not correspond to his vocation and devoted more of his free time to the fine arts. He produced simple drawings and rubber sculptures at first, followed by the first experiments with assemblages. Tony Cragg finally left his original career aspirations behind and began to study art, taking him from Gloucestershire College of Art and Design in Cheltenham to London and the Wimbledon School of Art, where he was taught by Roger Ackling and Jim Rogers. During his course, Tong Cragg shifted his artistic interest ever more away from painting and towards sculpture and consequently transferred to the Royal College of Art in London in 1973 to study sculpture.

Once he finished with his studies, Tony Cragg settled in Wuppertal and explored intensively the artistic currents of Arte Poverty, Land Art and Minimal Art. His acquaintance with the British conceptual artist Richard Long in particular exerted a formative influence on Cragg’s early development, and the artist found the materials for his works both in nature and on the city’s rubbish dumps. The confluence of “civilization’s rubbish” and natural resources was programmatic for Cragg in this phase. In the 1980s he presented his works at the great exhibitions of the international art world: at documenta 7 and 8 in Kassel and the Biennale in Venice, São Paolo and Sydney. His early fascination for installation art soon switched to focus on the creation of individual objects from durable materials such as wood, metal and especially fibreglass and it was the preferred use of fibreglass, Kevlar and plastic that developed into a striking unique selling point for Tony Cragg.

Tony Cragg repeatedly allowed his scientific roots to show through in his works, fusing non-representational abstract art with a sometimes figurative-like biomorphic language of form. With his unmistakeable style of explosive dynamism and organic structure, Tony Cragg became one of the leading representatives of “New British Sculpture”. The allusions to the human body that repeatedly resound can often only be recognised by specialists on the subject matter. In August 2013, Tony Cragg’s adopted hometown of Wuppertal unveiled his first monument, dedicated to the Nobel Prize winner Gerhard Domagk, the inventor of the first antibiotic. Again in Wuppertal, Cragg set up the Waldfrieden Sculpture Park, in which a private museum is operated to this day by the Cragg Foundation, displaying sculptures by Tony Cragg as well as creations by other significant artists such as Markus Lüpertz, Thomas Schütte, Richard Deacon and others. Cragg has received many prizes and awards for his art, including the British Turner Prize (1988), the French Ordre des Arts des Lettres, the Japanese Praemium Imperiale (2007) and the German Bundesverdienstkreuz (2012).
Tony Cragg lives and works in Wuppertal.

The Waldfrieden Sculpture Park in Wuppertal

The Waldfrieden Sculpture Park opened in 2008. In 2006, Tony Cragg acquired a 14-hectare wild park and a listed villa. He dedicated himself to the project for two years. The property is run as a private museum by the Cragg Foundation, established in 2005. Sculptures by Cragg and other artists are on display in the park, including Henry Moore and Thomas Schütte. The park was extended by five hectares in 2012. There are a total of three exhibition halls on the site. 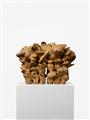 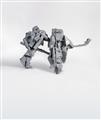 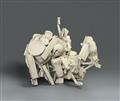 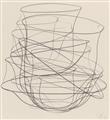 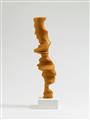 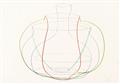 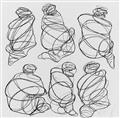 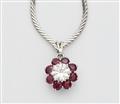 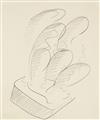