Buy works by Rudolf Schlichter in our upcoming auctions!

Do you own a work by Rudolf Schlichter, which you would like to sell?

Rudolf Schlichter - Works that have already been sold at Kunsthaus Lempertz:

After studying at the Karlsruhe Academy of Fine Arts, Rudolf Schlichter moved to Berlin in 1919, where he became a member of the “Novembergruppe” and, together with George Grosz and John Heartfield, joined the Dadaists. Together with Heartfield, he created the sculpture “Der preußische Erzengel” (The Prussian Archangel) for the First International Dada Fair (1920), which would lead to legal consequences on the grounds of the artists’ defaming the authorities. As a socio-critical and politically active artist, Schlichter became a member of the communist artists group ASSO, drawing satirical caricatures for left-wing magazines such as “Der Knüppel” and “Eulenspiegel”. He gradually turned to the veristic painting style of the New Objectivity, following George Grosz but displaying a toned-downed version of Grosz’s biting poignancy. In his paintings, Schlichter captures the life of the urban demimonde. He also created many perceptive portraits of friends and contemporaries, including Berthold Brecht and further illustrations focusing on class struggle or erotic themes. During the Nazi regime, Schlichter’s work was defamed as “degenerate”. In his later work, he began to assume a surrealistic style. 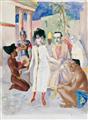 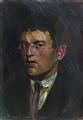 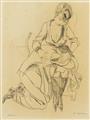 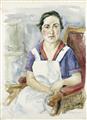