Buy works by Lawrence Weiner in our upcoming auctions!

Do you own a work by Lawrence Weiner, which you would like to sell?

Lawrence Weiner - Works that have already been sold at Kunsthaus Lempertz:

Lawrence Weiner believes in the force of the idea, attributing it so much artistic power that it is self-sufficient and does not actually require any further execution by the artist. The American conceptual artist has set himself at the pinnacle of his guild with these thoughts, and is considered a celebrated old master of his discipline.

Lawrence Weiner was born on 10 February 1942, the son of a confectionary retailer in the Bronx in New York. After successfully graduating from the Stuyvesant High School at the age of 16, he eked out a living with various casual jobs such as dockworker and porter, without really finding his feet anywhere. Weiner started studying literature and philosophy at Hunter College in New York, but soon felt ever more drawn towards the fine arts and so broke off the increasingly unsatisfactory course before the end of the first year. Instead, he took a trip through North America before returning to New York to succeed as an artist. At this time, Abstract Expressionism was at the peak of its influence, and Lawrence Weiner oriented himself accordingly to this current. He was 19 years old when he first presented an artwork to the public; this took the form of a performance work he named Cratering Piece, in which he simultaneously exploded four corners of a field in Marin County in California to create the eponymous craters.

In his early years, Lawrence Weiner experimented in many directions, with different materials, creating Shaped Canvases, and holding performances, with his first solo exhibition in 1964. Conceptual art increasingly became the focus of his creativity, which he developed further in proximity to artists such as Robert Barry, Douglas Huebler, Joseph Kosuth and Sol LeWitt. In his first book Statements from 1968, he drew up one of the most important manifestos of conceptual art – with just 64 pages, it was published by Seth Siegelaub and the Louis Kellner Foundation, and elicited a great response. As an established great of the contemporary art scene, Lawrence Weiner participated in the epochal exhibition When attitudes become form from Harald Szeemann in the Kunsthalle Bern, and in the 1970s, wall installations became Weiner’s preferred method of expression. Much of his art is based on the written word which he incorporates in his objects in the most varied of combinations.

The creative idea as actual artwork

Lawrence Weiner views the idea as a genuine work of art and sees his actual remit as the development of creative concepts. He sometimes leaves the execution of these concepts to others, who, however, must follow his guidelines. Often, these concepts and ideas are translated into large-format wall inscriptions, characteristic of Lawrence Weiner’s work. The artist is also interested in the medium of film and in 2011 his work Dirty Eyes was released in cinemas. It consists of a number of episodes in which the actors recite texts by the artist during encounters in places as diverse as offices, museums, rooftop terraces and pools – clothed in impressive images that are entirely in keeping with the aesthetic of the modern cinema film. 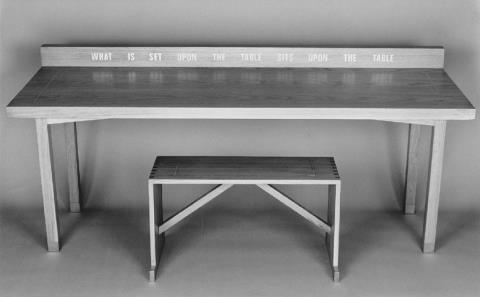 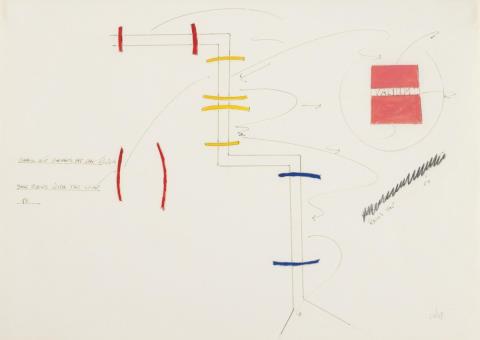