Buy works by George Condo in our upcoming auctions!

Do you own a work by George Condo, which you would like to sell?

George Condo - Works that have already been sold at Kunsthaus Lempertz:

For George Condo, the world is full of punchlines, and the American master of postmodernism understands better than anyone how to tease them out and make them visible for his fascinated audience. In doing so, he does not shy away from confrontation and provocation, driving it sometimes in a colourful and obscene way and shattering outdated traditions with forceful passion.

George Condo  - one of the most influential artists of modern times

George Condo was born in 1957 in Condo, in the US state of New Hampshire. After studying art history and music, he moved to New York where he became friends with artists such as Keith Haring and Jean-Michel Basquiat in the 1980s and worked with the writers Allen Ginsberg and William S. Burroughs. Alongside these greats, George Condo unfurled an influence that can hardly be overestimated, not only on the American art world, but also internationally – an influence that has lasted for 30 years and still seems unbroken. He also soon reached Germany, and the Monika Sprüth Gallery in Cologne dedicated a solo exhibition to him as early as 1984. Salman Rushdie was inspired by his paintings, the rapper Kanye West used motifs by George Condo on his album cover and presented his fiancé Kim Kardashian with a Birkin Bag designed by Condo at Christmas 2013.

The terror of modernity reinterprets the familiar

Spectacular reinterpretations of great modern classics run through George Condo’s work, with references to paintings by illustrious names such as Paul Cézanne, Alberto Giacometti, Paul Klee, Henri Matisse and Pablo Picasso commonplace. In doing so, George Condo is anything but prudish, indulging rather in a wild whirlpool of tastelessness and obscenities in which he distorts, deforms and sometimes completely dissolves the templates. The artist tries his hardest to avoid aesthetics and a sense of well-being, and instead rips open ugly wounds with a serrated blade and then bores into them with relish. Condo stages a freakshow, a circus of grotesques, a cabinet of curiosities. As well as traces of American and European art history, he rummages around in the comic scene, borrowing from figures such as Goofy, Mickey Mouse, Bugs Bunny and Batman. With his wild references and his own creations overflowing with creative fantasy, Condo has long since become a part of art history himself.

Fascinating confrontation with the progenitors

George Condo himself is repeatedly an object of artistic contemplation. In the year 2000, the American director John McNaughton dedicated the film Condo Painting to him, whilst the German writer Daniel Kehlmann wrote the story Gesichter, Fratzen, Condo (Faces, Grimaces, Condo) for the Association of Friends of the National Gallery, in which an overwhelmed visitor, gripped by panic, flees from a Condo exhibition in the Museum Berggruen through the emergency exit. While the escape was fictional, the exhibition had actually taken place: for its first large exhibition of contemporary art since its opening, in 2017 Museum Berggruen presented numerous works by George Condo, many of which were seen in public for the first time. The original works by George Condo brought a particular accent to the event – the immediate contrast between the template and the deformation elevated the appeal of both works. 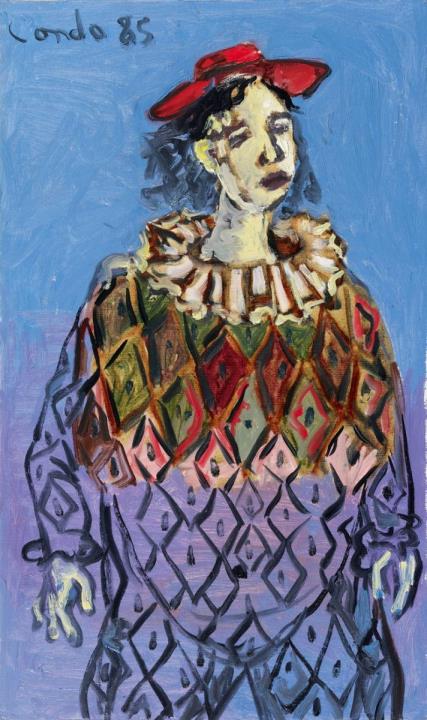