Buy works by Frans Snyders in our upcoming auctions!

Do you own a work by Frans Snyders, which you would like to sell?

Frans Snyders - Works that have already been sold at Kunsthaus Lempertz:

Frans Snyders was a gifted animal painter who captivated princes and kings with his gripping hunting scenes. The Flemish artist worked closely at times with his famous colleague Rubens.

Frans Snyders was born in Antwerp on 11 November 1579. The first stage of his path to that of highly lauded Old Master led him to Pieter Brueghel the Younger. He learnt the foundations of painting with the famous ‘Höllenbrueghel’ and later, in 1593, took further lessons with Hendrik van Balen the Elder. By the beginning of the 17th century, Frans Snyders was already a recognised painter - his admission to the Antwerp Guild of St. Luke in 1602 is documented. Snyders barely left his hometown of Antwerp as an apprentice, only for a study trip to Italy in 1608. The occasionally raised claim that Snyders was a pupil of the Baroque master Giovanni Benedetto Castiglione during his stay in Italy is a misinterpretation, for the Italian was not born until 1616, while Frans Snyders had already returned to Antwerp by 1609.

Frans Snyders only occasionally left his home of Antwerp, but his appointment as court painter to the Austrian Archduke Albrecht VII forced him to spend a longer period in Brussels. The Archduke and King Philipp III of Spain gave the artist a large number of commissions, often of hunting scenes, for which the passionate animal painter had developed considerable skill. This resulted in him decorating the magnificent hunting lodges of the nobility with his large format hunting scenes. His preference for dramatic and richly decorated scenes met the taste of the princes who added his works to their private collections, so that a large part of the painter’s work is not available to the public still today. Frans Snyders painted small format pictures only rarely and are almost without exception coveted collector’s pieces. His work also served often as models for engravings such as by Adam Von Bartsch.

Frans Snyders often collaborated with his famous painting colleague Rubens. Both painters were of the view that their individual style was quite distinctive, making it impossible to misattribute their works, and so therefore often did not sign their work. This has caused problems for researchers in later centuries, partly because it is difficult to make a correct attribution. This is exacerbated by the numerous pupils under both masters who diligently copied the technique of their teacher and strove for similarity to the last detail. This has even led to the authenticity of signed pictures being questioned: Dead Fish Guarded by a Dog, long attributed to Snyders, is now considered by recent researchers to be the work of an unknow epigone.

Frans Snyders died on 19 August 1657 in his birthplace and hometown of Antwerp. The sculptor Christian Daniel Rauch commemorated the artist with a bust of the painter for the Walhalla in the 19th century. 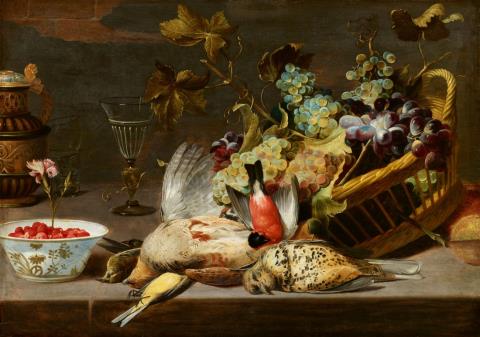 Frans Snyders - Still Life with Birds and a Basket of Grapes 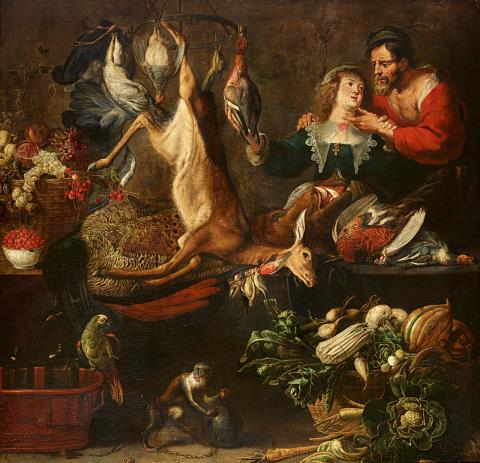 Frans Snyders, studio of - Large Still Life with a Couple, Game, Vegetables, Fruit, a Monkey, and a Parrot 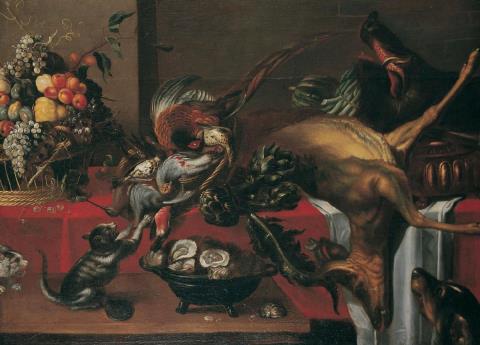 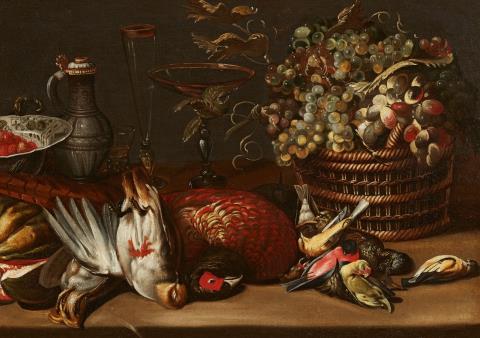 Frans Snyders, in the manner of - Still Life with Fruit and Game