Buy works by Peter Behrens in our upcoming auctions!

Do you own a work by Peter Behrens, which you would like to sell?

Peter Behrens - Works that have already been sold at Kunsthaus Lempertz:

Peter Behrens – First a painter of Art Nouveau, then architect and designer

Peter Behrens was born in Hamburg on 14 April 1868. The son of a prosperous landowning family in Schleswig-Holstein, he received a good education and was able to realise his inclinations towards art from an early age, studying painting in Karlsruhe, Düsseldorf and Munich. In Düsseldorf, he was taught by Ferdinand Brütt, and in Munich he dedicated himself primarily to Art Nouveau and was involved in the founding of the Munich Secession. His contemporaries included artistic personalities such as Lovis Corinth and Max Slevogt. Peter Behrens was one of the co-founders of the Vereinigte Werkstätten für Kunst im Handwerk (United Workshops for Art in Craftmanship), and his friendship with Otto Erich Hartleben enabled him to publish his works in the art journal PAN. Craftwork occupied an ever-greater place in Behren’s oeuvre and during a stay in the Darmstadt artist’s colony, he also became intensely occupied with architecture. Although he was able to convince the public with Haus Behrens, he also provoked the opposition of trained architects who did not want to accept that an autodidact had acquired such merits.

Tensions with the academy; successes as an industry designer

At the early age of 34, Peter Behrens took on the well-paid post of Director at the Düsseldorf School of Arts and Crafts, knocking out competitors such as Wilhelm Kreis and Martin Dülfer. He had great difficulty, however, in asserting his understanding of art against the overpowering influence of the neighbouring Düsseldorf Art Academy. He was supported by Karl Ernst Osthaus, who mediated him various projects, including the crematorium in Hagen, and he also produced the complete manifestation of Gustav Gericke’s lino factory. A further interest took the form of typography, and many fonts carry his name. In 1908, together with Anna Simons, he created the 16-meter-wide, world-famous inscription Dem deutschen Volke above the west portal of the Berlin Reichstag building. The design and installation had been preceded by heated public discussions in which Kaiser Wilhelm II himself had even participated. The actual installation in 1916 took place in the shadow of the First World War, without great public attention.

Fruitful and pioneering collaboration with AEG

Peter Behrens worked extensively for AEG, of which he was a member of their artistic advisory board. In this context, he strove to reduce industrial architecture to elementary forms and contributed to the objectification of building in Germany. Peter Behrens was involved in numerous important office and industry constructions at the beginning of the 20th century, and designed many objects, including lights, coffee machines and clocks. His design of the German Embassy in St. Petersburg met with much applause in Germany, although internationally the facade was regarded as too Teutonic. This did not, however, diminish his growing reputation, and in the economically difficult years following the First World War, he strove above all for frugal building methods. In the late phase of his work, he took on numerous urban planning projects in the growing city of Berlin. 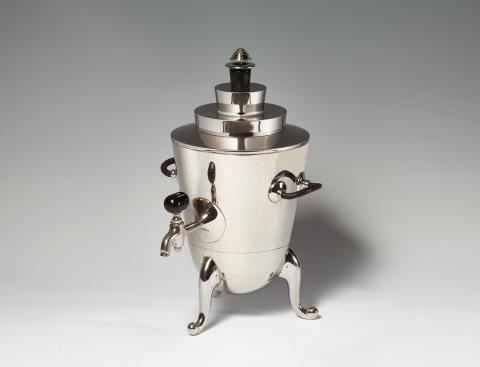