Buy works by Wim Delvoye in our upcoming auctions!

Do you own a work by Wim Delvoye, which you would like to sell?

Wim Delvoye - Works that have already been sold at Kunsthaus Lempertz:

Wim Delvoye loves contrasts. The Belgian conceptual artist does not just depict them, he also lives and embodies them - his art correspondingly has a polarizing effect on critics and the public. Between contempt and adoration, he experiences a broad spectrum of extremes and thus proves one thing in particular: his work is without comparison.

Wim Delvoye was born in Belgian Wervik in 1965. He owes not only his love of craftsmanship to his Flemish background, but also his drive for freedom und his repeatedly demonstrated appreciation for unconventionality. This combination is also clearly evident in his art, with some critics of the opinion that it occasionally veers too far in the direction of kitsch and relies on shrill provocation. He designed the artwork Chapelle for Mudam in Luxembourg, a chapel built entirely of metal in the Gothic style. As if the building material used was not unusual enough, it is the windows in particular, which Wim Delvoye used for his provocative messages. The glass pictures show coloured, black and grey depictions of very unholy motifs of grotesques, the middle finger, skulls and bones, a decidedly aesthetic message in supposedly religious guise. The border between the beauty of Gothic sacred buildings and the ugliness of the disfigured faces and obscene gestures thus becomes blurred.

The human body as metal cesspit

William Delvoye invests greatly in his sometimes sprawling monumental replicas of vehicles and buildings. Like the line between beautiful and ugly, so the line between craftwork and art is blurred when he employs whole crowds of artisans to execute his precisely considered decorative ornaments. In doing so, the artist refers back to existing artistic traditions and makes specific use of the experience of his colleagues whom he recruits from various countries and cultures. One highlight of his oeuvre, naturally contentious - how could it be anything else with Wim Delvoye – is the spectacular work Cloaca, a metal replica of the complex human digestive system, made in collaboration with expert scientists, which generates artificial faeces with the help of enzymes and other substances. It is high-tech, not unlike the prop from a grotesque horror film. “Artist’s shit”, Delvoye calls it with relish - and grazes on the wrath of those who sense the faecal matter more than the artwork in this approach to art. As a reaction to the taunts and protests, he quickly designed a second version, Cloaca – New & Improved, which he proudly presented in Basel.

A living work of art with tattoos

In the art of tattooing, William Delvoye sees an important opportunity to articulate himself creatively. In this, he also consciously chooses to cross boundaries that for many, are difficult to bear. He has piglets bred on a farm in Beijing which he tattooed with his pictures and then lets them grow as living artworks. The Swiss Tim Steiner had an elaborate tattoo done on his back of a Madonna with a skull, and was contractually obliged under Delvoye to present the artwork to the public – Steiner now sits as a living artwork for up to five hours a day, motionless, with his back on display. When he dies, his skin will be removed, prepared, and given to the collector who has already paid the significant sum of 150,000 euro for it. Should the human artwork Tim Steiner outlive his buyer, the skin will be transferred to the heirs. William Delvoye’s supporters answer the accusation of unethical practice by pointing out that art has nothing to do with morals – the basis for further discussion about the idiosyncratic Belgian is thus ensured. 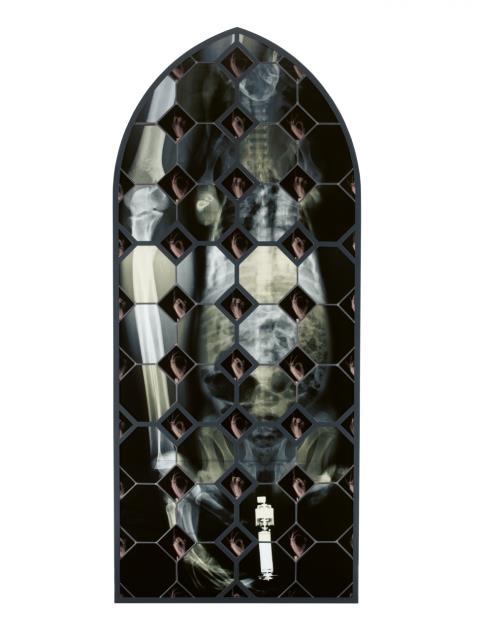