Buy works by Alfred Kubin in our upcoming auctions!

Do you own a work by Alfred Kubin, which you would like to sell?

Alfred Kubin - Works that have already been sold at Kunsthaus Lempertz:

Alfred Kubin never awoke from his nightmares, but painted them and preserved them as a disturbing testament for an audience, still fascinated today, which is only too happy to be deprived of sleep by the Austrian artist’s black-romantic fantasies.

Alfred Kubin was born on 10 April 1877 in Leitmeritz in the kingdom of Bohemia, today the Czech Republic. Following secondary school in Salzburg, he completed an apprenticeship with a photographer in Klagenfurt from 1892. He received painting lessons in Munich at the private school of Ludwig Schmid-Reutte, but broke off a postgraduate study in painting at the Imperial Academy with Nikolaus Gysis. In 1905 he undertook several study trips before settling in the property of the Castle Zwickledt near Wernstein am Inn. The acquisition of the property, lovingly called ‘Schlässl’ was made possible by his new wife Hedwig whom he had met as wealthy widow in the home of the writer Karl Wolfskehl. Hedwig was a sister of the popular social writer Oscar A. H. Schmitz, with whom Alfred Kubin later travelled through Europe, North Africa and Russia. In the first years at Castle Zwickledt, Kubin wrote his famous fantastic novel Die Andere Seite (The Other Side) which he was able to publish in 1909 with self-designed illustrations. Although the novel never found a wide audience, it is considered formative for the greats of the fantastic such as Franz Kafka, Gustav Meyrink and the German Surrealists.

Together with Karl Hofer, Marianne von Werefkin, Adolf Erbslöh, Wassily Kandinsky, Gabriele Münter and Alexej von Jawlensky, Alfred Kubin founded the Neue Künstlervereinigung München (New Artists' Association of Munich) out of which the Blae Reiter emerged in 1911, in which Kubin also participated in its second exhibition with graphic works. The artist was also very active as a book illustrator, providing numerous classics by Edgar Allan Poe, Elias Canetti and Dostoevsky with his dark drawings. With the knowledge of his compliant wide, Kubin cultivated numerous affairs, the most serious of which was his relationship with Emmy Haesele. Even after the artist abruptly broke off the relationship, the wife of the eminent Dr. Hans Haeserle could not let Kubin go and pursued him unsuccessfully. The unhappy liaison encouraged Emmy Haeserle however to start drawing and painting, whilst Kubin processed this period in his lithographic series Ali, der Schimmelhengst (The Grey Stallion) which told the fate of an impetuous Tartar horse, and which ended in sad loneliness.

Alfred Kubin conducted extensive correspondences by letter, among others with Karl Rössing, Hermann Hesse, Hans Fronius and Otto Coester. He designed the stage set for the premiere of the drama Rauhnacht (Wild Night) by Richard Billinger under Otto Falckenberg; he had reciprocal relationship with Billlinger, examining the writer’s work in his drawings, who in turn dedicated several poems to Kubin. The fantastical, dark phantasmagorias that Kubin often captured in feverish strokes were predominantly inspired by Max Klinger, Edward Munch, James Ensor, Francisco de Goya and Odilon Redon. The artist’s bleak dream visions were seen as ‘degenerate art’ by the National Socialists, but Kubin was not banned from exhibiting so that, despite the confiscation of 63 works, he was able to publish further drawings – even in a Nazi propaganda newspaper.

Alfred Kubin died on 20 August 1959 in Zwickelstedt. His grave was designed by the sculptor Karl Prantl. 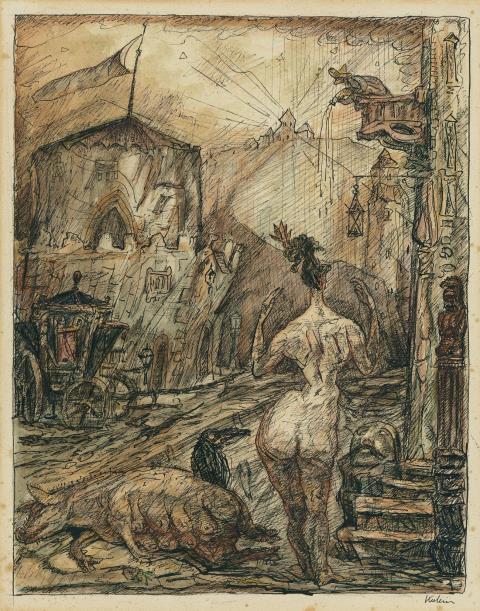 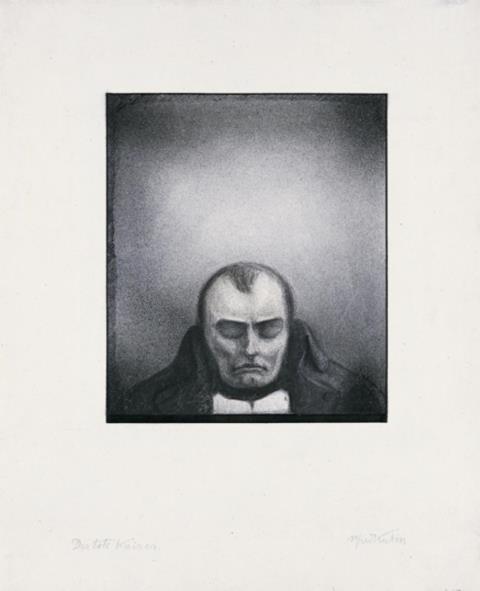 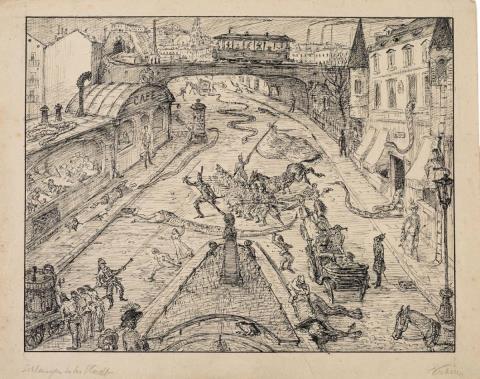 Alfred Kubin - Schlangen in der Stadt (Snakes in the City) 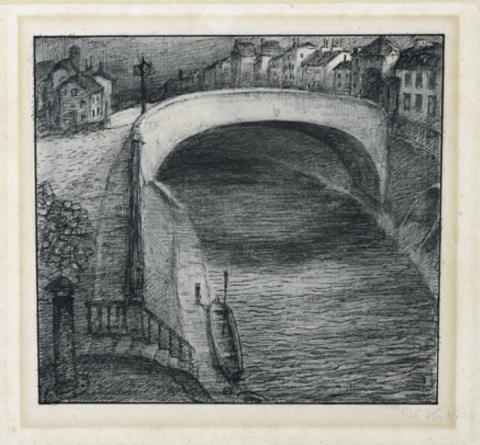 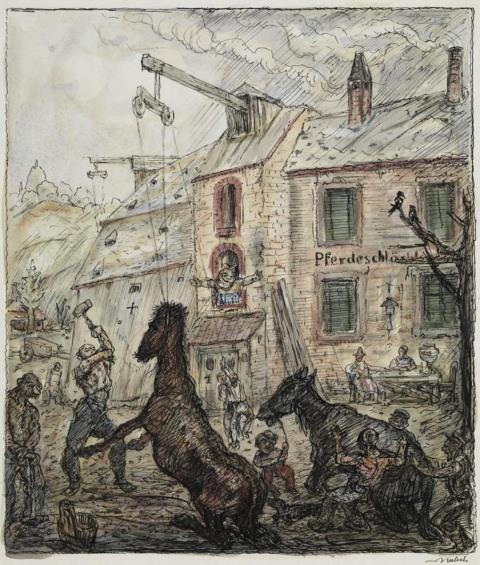 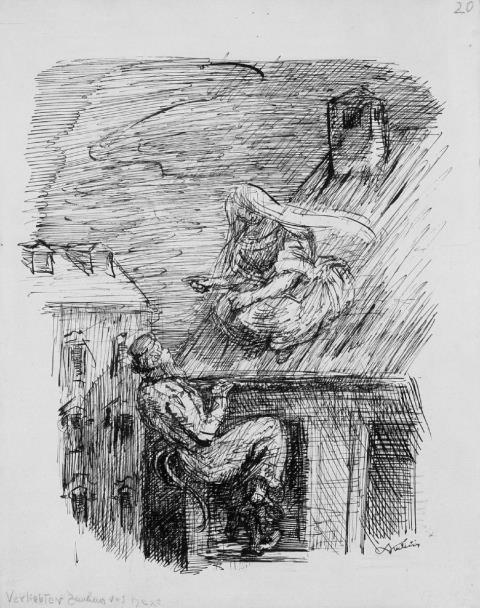 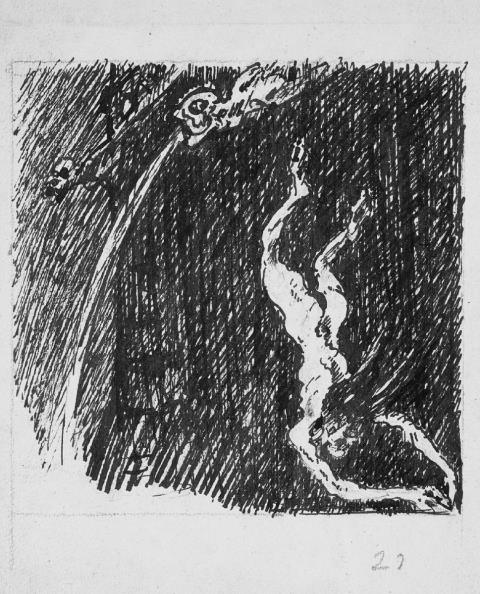 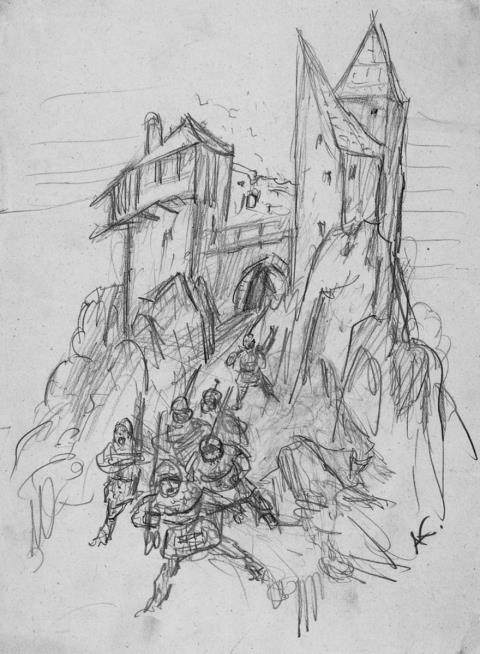 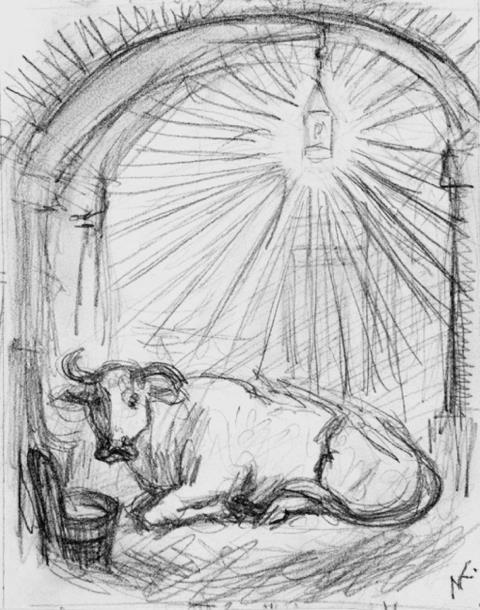 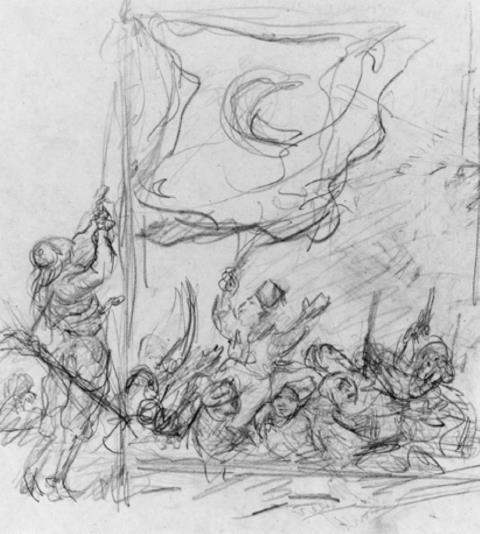 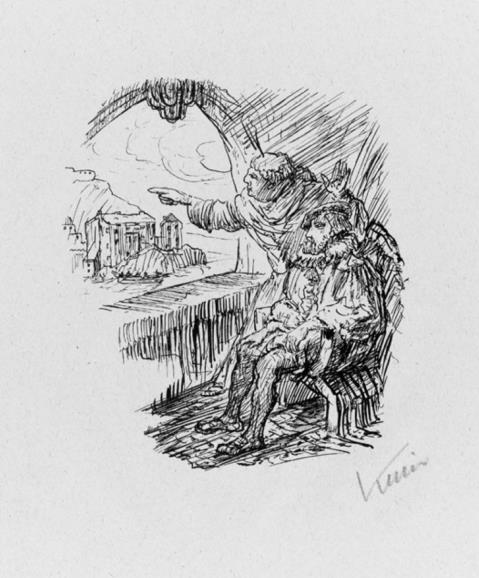