Buy works by Meret Oppenheim in our upcoming auctions!

Do you own a work by Meret Oppenheim, which you would like to sell?

Meret Oppenheim - Works that have already been sold at Kunsthaus Lempertz:

Meret Oppenheim wanted to be free, and she knew that as a woman, she had to work hard for this goal. With her object art rooted in Surrealism, she grew beyond the role of muse to become a celebrated designer and an idol of her generation.

Meret Oppenheim – a childhood and youth characterized by literature and music

Merert Oppenheim was born on 6 October 1913 in Charlottenburg, today a district of Berlin. The daughter of a German-Jewish doctor, she grew up in a household that had an affinity for art: her name was taken from Meretlein from the book Grünen Heinrich by Gottfried Keller, and her grandmother Lisa Wenger was a celebrated Swiss artist who wrote children’s books and who had attended art academies in Paris, Florence and Düsseldorf in her youth. Her Aunt Ruth Wenger, a concert singer, was married for a time to the writer Herman Hesse, and Meret Oppenheim herself read the works of Geothe, Rilke and the Romantics. In particular, however, Meret’s tendency for art was noticeable at a young age with more drawings than sums in her school maths books. Carl Burckhardt, a family friend, introduced Meret Oppenhiem to his son Titus Burckhardt and his friends, the artists Otto Abt, Walter Bodmer, Walter Kurt Wiemken and Irène Zurkinden.

Man Ray made her ‘Muse of the Surrealists’

In May 1932, Meret Oppenheim and Irène Zurkinden travelled together to Paris to put into practice their dream of becoming artists. Meret was supported by her parents who were very understanding of their daughter’s desire for freedom. She was just 18 years old when she met Hans Arp and Alberto Giacometti. They were impressed by the early works of the young artist and invited her to present her pictures to a great audience in the Salon des Surindépendants. She soon felt at home within the circle of Surrealists around André Breton, not least due to a love affair with Max Ernst that lasted several months. During this time, she posed for the famous Aktzyklus Érotique voilée by Man Ray, bringing her the reputation of ‘muse of the Surrealists’. The openness and confidence with which she stood as model was characteristic for her lifestyle: she had numerous short-lived affairs, including with Giacometti, Breton and various women. When she finally agreed to marry Wolfgang La Roche, it was to be an open marriage. Meret Oppenheim stood by her freedom – in every respect. Max Ernst once remarked that Meret had outgrown them all.

Breakfast in fur - a Surrealist masterpiece

Meret Oppenheim created probably her most famous work in 1936: Breakfast in Fur breathes completely the spirit of Surrealism. The object consists of a cup, saucer and spoon covered in fur. The now widely known title of the work came from André Breton who intended Déjeuner en fourrure to satirise Manet’s famous painting Le déjeuner sur l’herbe. It was first presented in the Exposition surréaliste d'objets and soon began a triumphal procession around the world, with Alfred H. Barr bringing it to New York to the Museum of Modern Art in the winter of 1936/37 within the framework of the famous exhibition Fantastic Art, Dada, Surrealism. Oppenheim returned to Switzerland, fought through a creative block, and moved finally from Basel to Bern as her hometown did not show her enough appreciation. In 1983, the Meret Oppenheim Fountain was inaugurated in Bern. Colloquially known as Oppenheimbrunnen, the fountain at the Weisenhausplatz in Bern consists of a tall concrete column which mockers somewhat unflatteringly refer to as the exhaust pipe of the underground car park located beneath the square. 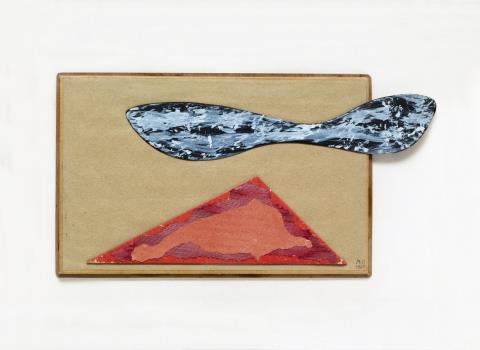