Buy works by Rembrandt in our upcoming auctions!

Do you own a work by Rembrandt, which you would like to sell?

Rembrandt - Works that have already been sold at Kunsthaus Lempertz:

Rembrandt is one of the most famous artists not only of the Golden Age of the Netherlands but of Baroque painting in general. Much copied and imitated, but rarely equaled, his work is characterised by the choice of novel motifs and the consummate mastery of chiaroscuro, light-dark painting.

Rembrandt Harmenszoon van Rijn was born in Leiden on 15 July 1606. The eight of nine children of a miller and baker family, he attended a Calvinist Latin School where he was confronted with religious motifs which would later occupy a great part of his creativity. He ended his philosophy studies at Leiden University to dedicate himself completely to painting. His first teacher, Jacob Isaacsz van Swanenburgh fostered an interest in the vivid depiction of hellfire, which may account for Rembrandt’s pronounced interest in the depiction of light. He was however more strongly influenced by his studies under his second master, Pieter Lastman in Amsterdam, where he learned history painting, the predominant genre of the time. In 1625 he returned to his hometown of Leiden and opened his first workshop together with his friend Jan Lievens. He initially worked as a history painter and practiced the depiction of the human physiognomy, and soon produced his first etchings.

Rembrandt acquired many important buyers for his pictures through the Dutch diplomat Constantijn Huygens, among them the English court. His growing success led him finally to Amsterdam where he joined the renowned art dealer Hendrick van Uylenburgh who provided him with numerous commissions from rich Amsterdam merchants. In 1634 Rembrandt married Saskia van Uylenburgh, his patron’s niece, and joined the Amsterdam Saint Lukas Guild. Saskia was an important source of inspiration for the artist and modelled for a number of his paintings. Significantly, there is not a single portrait of Saskia, only depictions in female biblical roles, as a mythical heroine or ancient goddess. Her early death left Rembrandt in possession of a considerable fortune, but his wife had stipulated in her will that in the event of remarriage, half of the fortune would pass to their son Titus. The artist chose not to remarry but conducted diverse unhappy relationships.

His last years in poverty, powerful resonance through the eras

Rembrandt was unable to emulate the golden years he had experienced with his wife Saskia who had managed the books and brought important customers to the business-inept artist with great skill and energy. This was compounded by other unfavourable conditions: his portrait style was considered old-fashioned and long-term agreed payments for his luxurious house had suddenly to be paid in full – a strange irony in view of the fact that today, prices in the millions are offered for works by Rembrandt. Having brought an unsuccessful case against his wife’s family during her lifetime to refute accusations of extravagance, the artist lost his entire fortune and died in abject poverty. A few months before his death he mourned the passing of his beloved only son Titus. Rembrandt van Rijn died in Amsterdam on 4 October 1669. 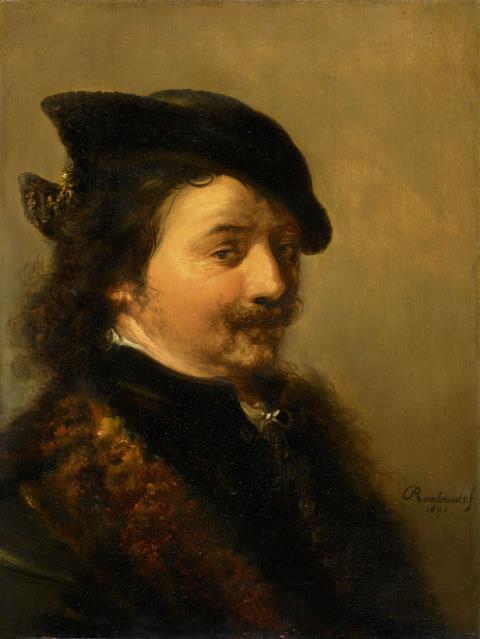 Rembrandt, in the manner of - Portrait of a Man 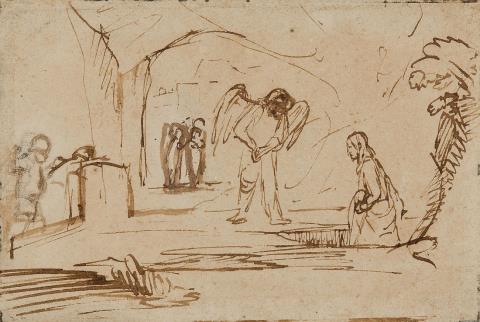 Rembrandt, follower of - The Annunciation