Buy works by Bridget Riley in our upcoming auctions!

Do you own a work by Bridget Riley, which you would like to sell?

Bridget Riley - Works that have already been sold at Kunsthaus Lempertz:

Bridget Riley is considered an icon of Op Art, but is anything else but happy with this attribution, and finds the term rather vulgar and ridiculous. The British artist, who contributed significantly to the development of Pop Art, prefers a more subtle approach for her abstract pictures which are often so skilfully composed that they seem to be alive.

Bridget Riley was born in London on 24 April 1931. She spent the Second World War with her mother, aunt and younger sister in a remote house in Cornwall, where comforts such as a bath and running water were scarce, and the beds had to be protected from the damp with covers. Despite this, Bridget Riley thought of this place of refuge as a paradise and she learnt to observe the magnificent play of colours in nature on long walks with her mother. Her art education started at Cheltenham Ladies’ College where her teacher Colin Hayes arranged her release from classroom teaching so she could nurture her artistic talent. She emulated Georges Seurat in her early work, an artist she greatly admired; this brought limited success however, as she later admitted quite unpretentiously. Riley’s promising development was hampered by a serious traffic accident involving her father, whom she nursed for months, but she went on to work as a saleswoman and teacher before joining the famous advertising agency JWT (at that time, J. Walter Thompson).

In 1960, Bridget Riley undertook a study trip to Italy where she discovered the work of Piero della Francesca and other Renaissance masters and also explored Futurism. That same year, she held a teaching post at the Hornsey College of Art where she made the decisive step in her artistic development towards Op Art. The quality of her pictures enabled her first solo exhibition as early as 1962 in London’s Gallery One, whilst an exhibition in the Richard Feigen Gallery in New York was sold out before it even opened. Bridget Riley soon received prizes and awards for her work, including the International Prize of the Venice Biennale in 1968. She first took part in Kassel’s Documenta that year, followed in 1977 by Documenta 6. Bridget Riley painted a series of murals on the interior of Royal Liverpool Hospital, designed the stage set for the ballet Colour Moves by Robert North, and worked with Peter Sedgley on the S.P.A.C.E. Project to provide upcoming artists with studio space.

Nothing is at it seems: Bridget Riley’s pictures trick the eye

While Bridget Riley worked at the beginning in particular with the contrast of black and white, she began to experiment more extensively with colour in the late 1960s following an inspirational trip to Egypt. With her pictorial compositions, the artist skilfully exploits the peculiarities of the human eye, which is only too happy to succumb to optical illusions. Thus, the black lines of her early work seem to possess a mobile life of their own just as much as the later colour surfaces for which Riley is so famous.

Bridget Riley works from three studios today: in Vaucluse-Tal in France, Holland Park in London, and in Cornwall, where she spent her childhood. 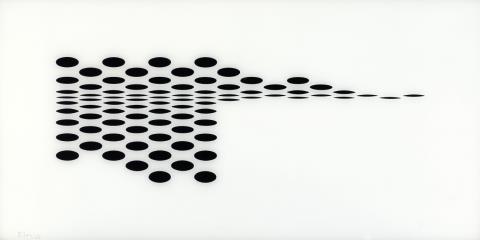