Buy works by Alphonse Mucha in our upcoming auctions!

Do you own a work by Alphonse Mucha, which you would like to sell?

Alphonse Mucha - Works that have already been sold at Kunsthaus Lempertz:

With his Slav Epic, Alphonse Mucha created a visually powerful chronicle of Slavic history of monumental dimensions. The Czech painter and draughtsman achieved fame and wealth however as a commercial artist; his incomparable Art Nouveau posters are coveted collectors’ items of the Belle Époque period to this day.

Alphonse Mucha – Highly gifted as a child; beginnings as an autodidact

Alphonse Mucha was born in Ivančice in the Czech Republic on 24 July 1860. The third son of a court usher, he demonstrated his keen talent for art at an early age – it is said he learned to draw before he could walk. Despite this, an artistic career was initially out of the question; on finishing school, Alphonse Mucha worked for a while as an office clerk and fostered his talent for painting and drawing entirely as an autodidact. His application to the Prague Art Academy was rejected, and instead he found a position in the studio of the artists Carlo Brioschi, Hermann Burghart and Johann Kautsky. There he was mainly engaged in scenery painting, in particular for the traditional Ringtheater. Following the catastrophic fire on 8 December 1881, which according to the Austrian writer and encyclopaedist Ludwig Erisenberg, claimed the lives of around 1000 people, Alphonse Mucha was the first to lose his position as the workshop’s youngest employee, and had to struggle to scrape a living as a freelance draughtsman and portraitist.

Modest circumstances in Paris, the birth of the Slav Epic

Alphonse Mucha won the goodwill of Count Eduard Khuen von Belasy with his furnishment of the neo-baroque lodge Emin zámek, who henceforth sponsored him and enabled Mucha to study at the Academy of Fine Arts in Munich from 1885 to 1887. In 1889, Mucha succumbed to the pull of Paris, the undisputed cultural capital of the time. It was the year of the World Fair, and in the shadow of the newly erected Eifel Tower, the young artist attended the Académie Julian and the Académie Colarossi. As the financial support of Count Khuen von Belasy dried up, Mucha was forced to take on work as a book illustrator, and shared a studio for while with Paul Gauguin in Paris. On a visit to the World Fair, Mucha discovered the Slavs and their culture as an artistic subject which occupied him for many years, and in his late phase led him to his main work, the painting cycle The Slav Epic. He completed it in 1928 as a well-established and financially independent artist and gifted the 20 large-format tempera on canvas pictures to the city of Prague.

Encounter with Sarah Bernhardt, breakthrough as a poster artist

Alphonse Mucha achieved the breakthrough with a casual job for Sarah Bernhardt, the most famous actress of her time, admired all over the world. The loss of her usual poster painter offered Mucha the chance to prove himself. His posters for Sarah Bernhardt, such as in her famed role as la dame aux camélias, brought the artist sudden fame, and are still celebrated today as masterpieces of Art Nouveau. They were so popular amongst his contemporaries that almost the entire stock was stolen from public sites. From then on, Alphonse Mucha belonged to the most sought-after poster artists of the Belle Époque; his most important illustrative work is considered to be the 124 colour lithographs to the fairy tale Ilsée, Princesse de Tripoli by Robert de Flers. Mucha taught drawing in Paris and New York, travelled with Auguste Rodin, and returned finally as a celebrated artist to his homeland of the Czech Republic where he lived in a castle near Prague until the invasion of the German troops. The artist was among the first to be interned by the occupiers. 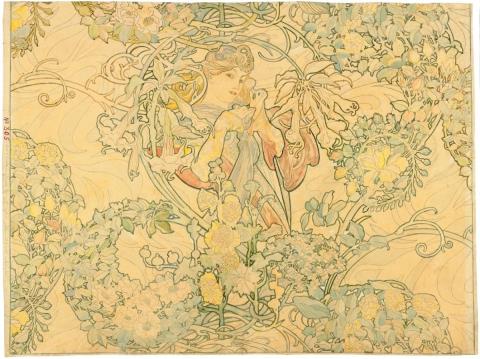 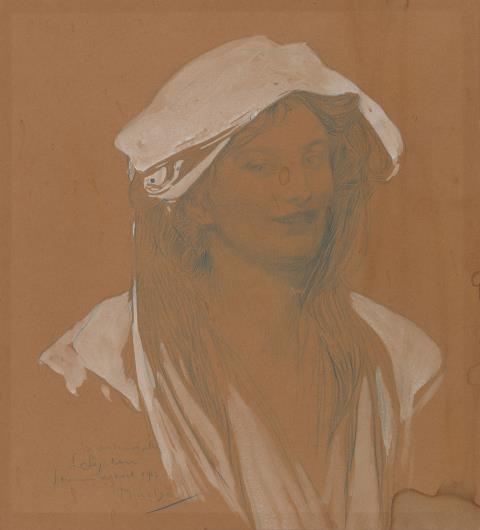 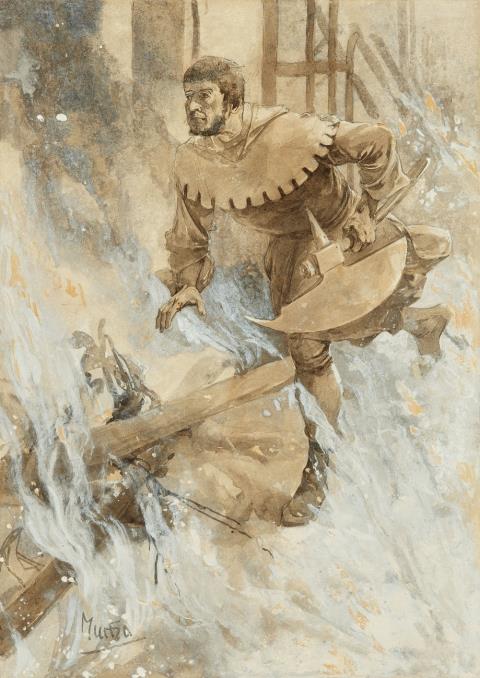 Alphonse Mucha - Illustration for a Fable