Buy works by Paul Delvaux in our upcoming auctions!

Do you own a work by Paul Delvaux, which you would like to sell?

Paul Delvaux - Works that have already been sold at Kunsthaus Lempertz:

The Belgian painter Paul Delvaux left reality with dreamy ease behind him. The Surrealist, who did not want to be one, used his art to unlock access to hidden worlds, at the centre of which were mostly women. Naked women – and skeletons.

As a young man, Paul Delvaux was impassioned about Jules Verne and Homer

Paul Delvaux was born on 23 September 1897 in Antheit (today, Wanze), the son of a lawyer. As a young man he took music lessons, studied Greek and Latin, and devoured the works of Jules Verne as well as the epics of Homer. All these interests left vivid traces in his early work, his first paintings depicting almost without exception fantastic motifs and mythological themes. From 1916 to 1919 he studied at the Royal Academy of Science and Fine Art in Brussels, initially taking architecture because his parents were opposed to their son’s wish to become a painter. The young man did not give up his goal, however, and he was eventually permitted to take the desired painting lessons with Constant Montald and Jean Delville. Frans Courtens and Alfred Bastien were also a great influence on the prospective painter, and during this time, Delvaux primarily created naturalistic landscape paintings.

From Expressionist to Surrealist

Paul Delvaux was incredibly productive; between 1920 and 1925 he produced around 80 paintings, and thus had a rich reserve of works to draw from when he finally held his first solo exhibition in 1925. Up until 1930, the majority of his paintings depicted female nudes in landscapes, clearly influenced by the Flemish Expressionism of Constant Permeke or Gustave De Smet and it was not until 1933 that a certain change in Delvaux’ painting style became evident, a gradual turn to Surrealism owed to the Italian artist Giorgio de Chirico, whose work had made a strong impression on the young Belgian since he had first come into contact with it in the mid-1920s. In the 1930s, Delvaux also began adapting several motifs of his colleague René Magritte, and in the course of this development, Paul Delvaux finally joined the Surrealists in 1937 and participated in the great Surrealist exhibition in Paris in 1938.

Although Paul Delvaux worked closely with the Surrealists and his work exhibited numerous references to Surrealism, he did not view himself as a Surrealist in the proper sense. Nevertheless, his paintings became famous – especially for the many strange female nudes which puzzled the viewer with their fixed gaze, sunk in a trance, and with their strange gestures. Sometimes he surrounded them with skeletons or stern-looking gentlemen with melons, which he had probably borrowed from the stories of his idol as a youth, Jules Verne. In the 1950s he began to paint brightly lit trains roaring through the night, watched by young girls, who, in contrast to the artist’s usual practice, were clothed. These pictures did not seem overly surrealistic, but nevertheless exercised an unusual, almost hallucinatory fascination on the viewer through their shimmering moonlight. Delvaux associated the motif of the train with an important childhood memory: as a young boy he had witnessed the introduction of the first electric trams in Brussels. 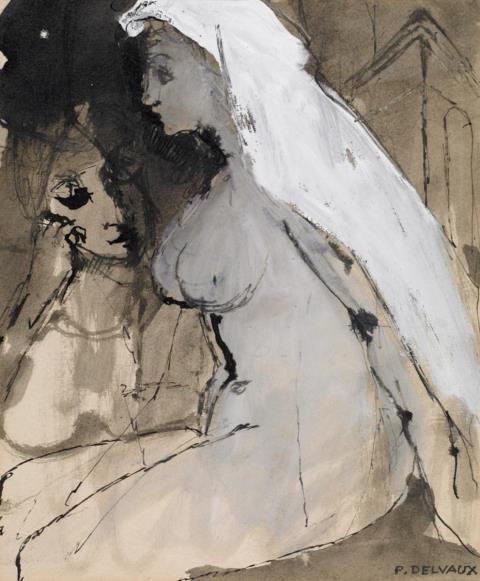 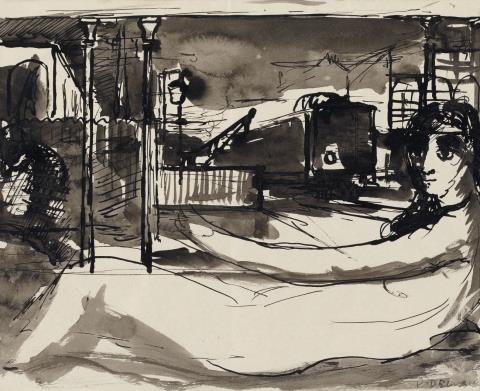 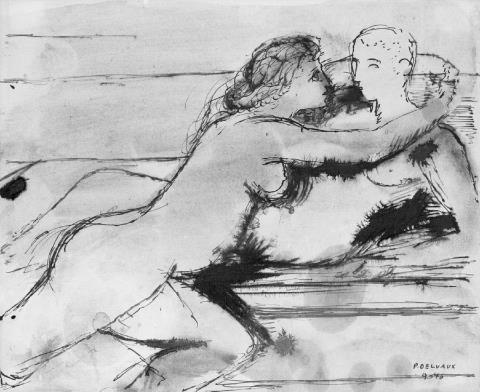 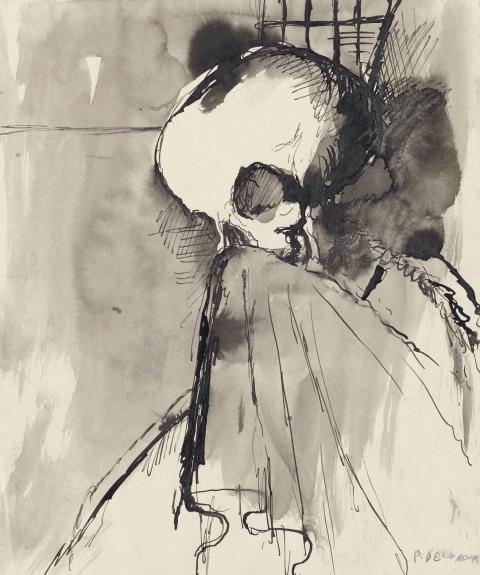 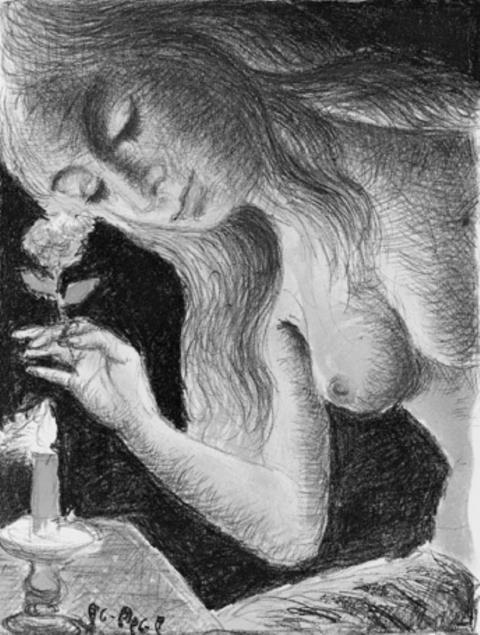 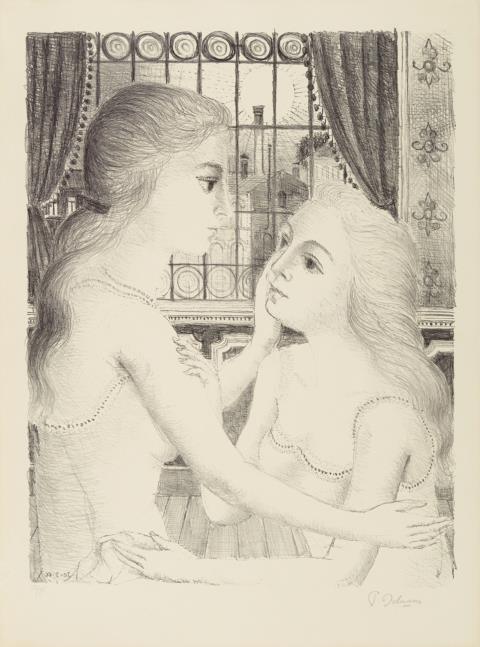 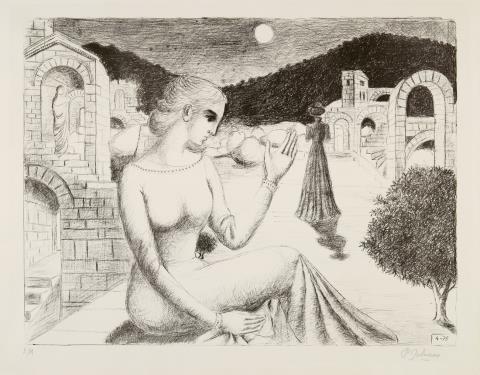 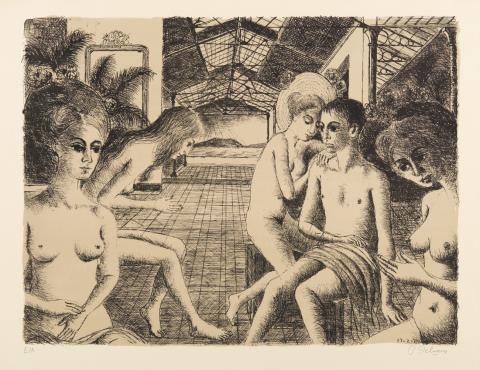 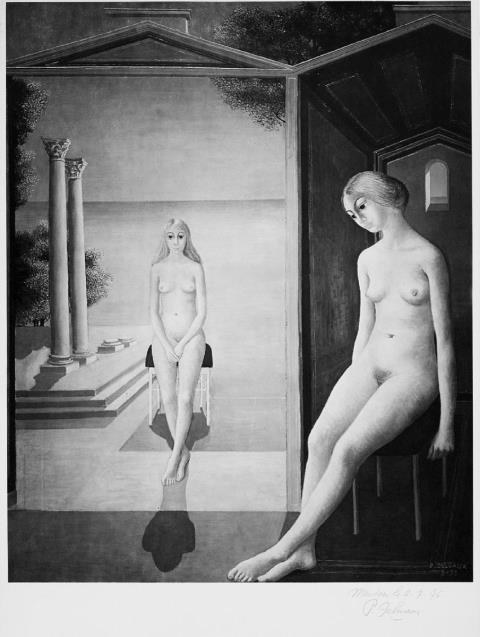 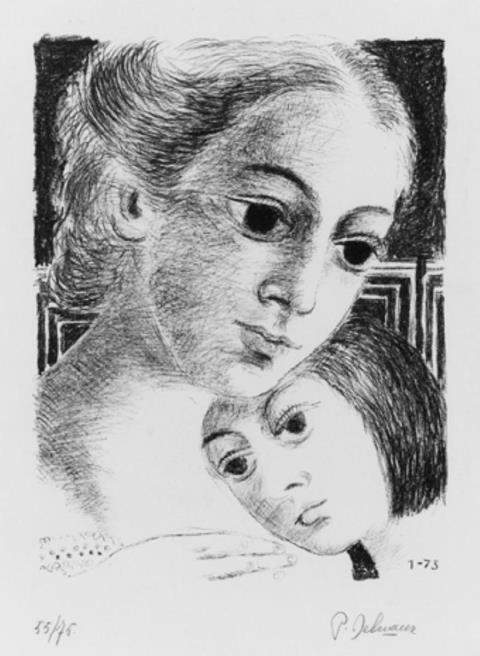